What is the Average UK Salary?

As Brits, we rarely talk about salaries and how much we earn. This means many of us don’t have a clue if we’re earning above or below the average salary in the UK. We wanted to change that.

To do so, we’ve reviewed the latest annual Government report, released in November 2022, via the Office for National Statistics (ONS), to create the most comprehensive guide to the salaries and the average wage in the UK.

Our analysis will let you know if you’re getting a good deal or not.

It can also be useful in salary negotiations or making sure a job description is legitimate and fair. Below you’ll find statistics on the average UK salary per gender, age, industry, and how these have changed over the years.

What is the average salary in the UK now?

There are technically a few ways to view the data for the average pay in the UK, but to keep it simple, the latest data from the ONS shows the following:

For this analysis, we have reviewed median salaries as they are the most accurate way to view and compare this data. You can see how this compares over time, gender, and age in the full analysis below.

Part-time employees in the UK earned an average of £12,247 in 2022, which was an 8.6% increase from 2021. Part-time workers are defined by the UK Government as someone who works fewer hours than full-time workers at the same place of employment, therefore, part-time hours could typically range all the way up to 34 hours a week.

The below chart shows the average full-time earnings since 2011 in the UK. 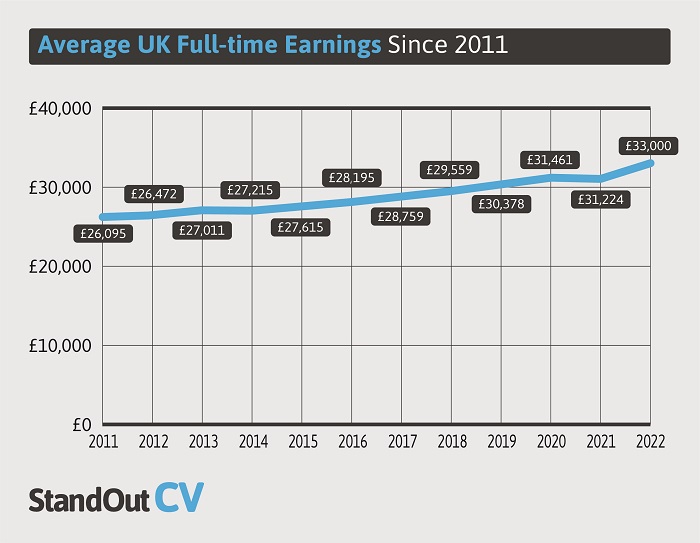 Which jobs pay the most in the UK?

According to the latest Annual Survey of Hours and Earnings (ASHE) report by the ONS, Marketing, sales, and advertising directors are paid the highest salary on average, at £74,224. This is an increase of 6.7% compared to the same job’s annual median salary in 2021, and is 167.4% higher than 2022’s average salary in the UK.

The ONS classifies marketing, sales, and advertising directors as all one job, therefore salaries could vary drastically between those who hold a role that covers only marketing, or only sales for example.

Highest paying jobs in the UK

With marketing, sales, and advertising director being the highest-paid job in the UK, CEOs have been knocked down to second position when comparing rankings to 2021, this is in part due to the role’s 2.2% average salary decline. IT directors are now the UK’s third-highest paid job earning an average salary of £68,912

You can see the full top ten highest paid jobs in the UK in the table below as well as a year-on-year (YoY) comparison to 2021:

As the UK’s highest paying job is now that of a marketing, sales, and advertising director, we’ve tracked the average earnings of this role over the years to see how it got to top position.

When reviewing the data it is important to note that before 2021, the ONS classed the role as ‘Marketing and sales director’ then advertising was added to the role in 2021 and 2022. This is likely due to marketing directors being responsible for paid marketing (advertising) more in recent years. 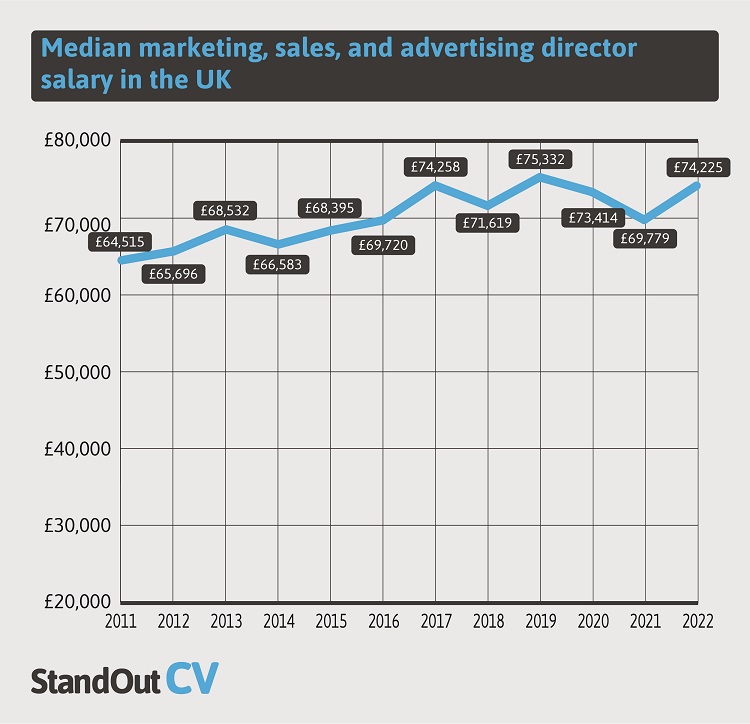 Average CEO salary in the UK

As one of the consistently high-earning jobs in the UK, we also analysed CEO’s average salaries over time.

Which jobs in the UK have the lowest average salary?

After playworkers, bar staff were found to have the second-lowest average salary in the UK at £7,844, this is however 41.6% more than they were earning on average in 2021. This increase however, is reflective of the pandemic heavily impacting the hospitality industry and their earnings.

The table below reveals the ten lowest paid jobs on average in the UK in 2022 which is largely unchanged compared to 2021 apart from fitness and wellbeing instructors entering the top ten.

At the end of the 2022 financial year, the average full-time earnings in the UK increased by 5.7%, the highest earnings change increase in recent years. This is likely due to the lower figures recorded in the 2020/2021 financial year due to the furlough scheme and the financial impacts of the pandemic.

Part-time salaries had an even bigger annual percentage change at 8.6%, while the overall average salary in the UK increased by 6.8%. 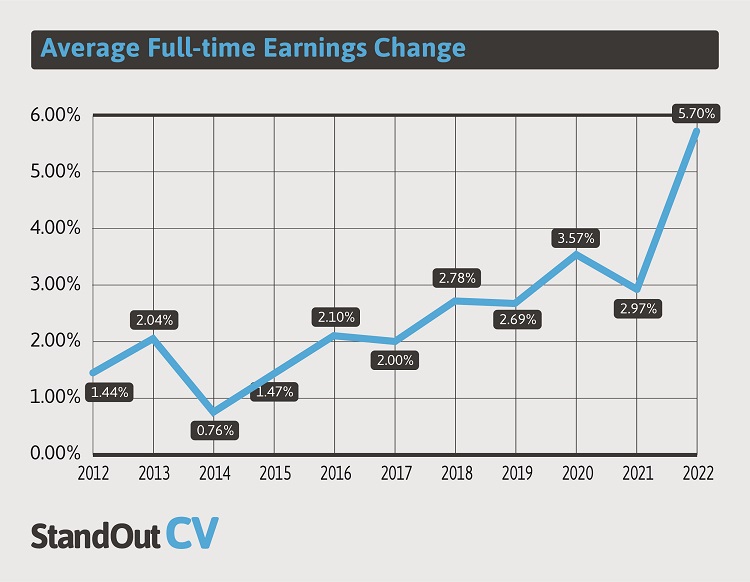 Jobs with the highest earnings growth in 2022

By analysing full-time earnings data from 2022 we can see which roles had the highest percentage increase change in their average salaries year-on-year. We’ve broken this down by both full and part-time jobs. Those jobs which the ONS labels ‘Not elsewhere classified’, were removed from this analysis as it is difficult to define exactly what the role is.

The biggest salary jump for full-time employees was found in those who work as librarians, who saw a full-time median salary increase of 26.8% to £35,003. Second to librarians, houseparents (who typically look after students in boarding educational institutions) saw a 22.8% increase, followed by restaurant/catering managers (22.2%).

When it came to those who work part-time hours (anything fewer than full-time hours at the same business) air travel assistants (those who deal with passengers at the airport) saw a 67.7% increase in earnings compared to the same period in 2021. This is almost certainly due to the impact the pandemic had on airlines.

Jobs with the highest earnings decline in 2022

The average pay across the UK saw a 6.8% increase, however there were a number of roles that did not follow this trend, and to an even worse extent, suffered a decline in average wages when compared to 2021.

Between both full and part-time roles, the largest earnings decline was seen in those who work as part-time bakers, who saw a decline of -22.3% in their average pay to £11,647, while Generalist medical practitioners saw the highest full-time earnings decline (-14.5%).

As mentioned, bakers saw the highest percentage decrease in earnings (-22.3%) out of all part-time employees and were the only workers to see a decrease of earnings above a fifth.

After bakers, shopkeepers saw the second-highest decline (-17.9%), followed by biochemists (-14.4%). There is another likely impact of the pandemic here with biochemists and undertakers seeing their average salaries decline as the pandemic response required fewer tests and the death rate was reduced due to the vaccine rollout.

You can see the top ten part-time jobs in the UK ranked by their average salary decline in the table below.

The latest ONS data reveals that average male full-time workers in the UK earn 18.78% more than their female counterparts. When it comes to part-time work, the difference is in favour of female workers as they earn an average of 2.77% more. This is due to the fact that more women are employed in part-time roles than men (38% vs 13%).

In the below chart you can see the year-by-year play of how the gender pay gap in the UK has developed over time. This data is based on full-time earnings from the ONS. 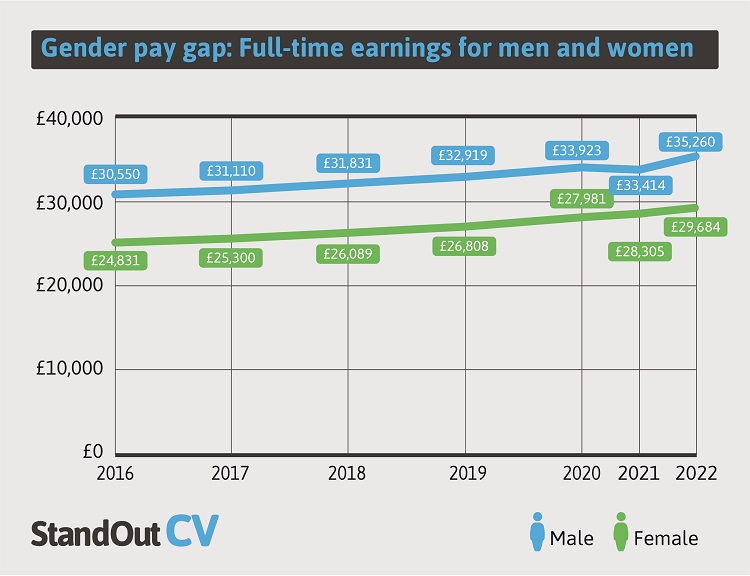 Which roles have the biggest gender wage gap in the UK?

The latest data shows that in five of the largest wage gap professions males earn 50% or more than their female counterparts. Meaning, men in these roles earn the same average wage as women in the same role in roughly half the time.

Mobile machine drivers, such as those responsible for tarmac surfacing, or pile driving, have the highest gender pay gap in the UK, where men are paid 57.99% more than women.

The below table shows the top roles with the largest gender pay gap in favour of male employees in the UK. Elementary occupations and those not classified by the ONS have been removed from this part of the analysis.

Jobs with the largest gender pay gap in 2021

The following table reveals the jobs that had the largest gender pay gap in 2021 for a more in-depth year-on-year comparison.

Jobs where men have the highest gender pay gap

At a monetary level, financial managers and directors have the highest average salary for men compared to women, with the former paid £24,778 more in an average year.

The table below reveals the top five jobs where men earn more than women in an average annual salary (combined full and part-time).

Jobs where women have the highest gender pay gap

Only 16 of the 333 roles analysed by the ONS have women earning more than men on average in the same roles. Welfare professionals (people who advise families experiencing a crisis, mental health counselors, etc). who are women, earn an average of £6,617 more than men, while telecoms installers have a gender pay gap in favour of women earning £5,879 more a year.

You can see the top five jobs where women earn more than men in the UK in the table below.

Due to limited data published by the ONS, there may be some roles where women/men earn very high salaries but the male/female data was not published to be able to provide a comparison. You can, however, see the highest-earning professions for men and women below.

Highest earning professions in the UK by gender

Below you can see the highest-earning professions for both men and women in the UK in 2022.

As you age and spend more time in an industry, accruing more and more experience in your career, your value to employers naturally increases, and at the same time your expectations probably follow suit.

Those aged older, in their 50s and above, see a reduced salary as people begin to take retirement or reduce hours as the need for money is typically reduced with children leaving home for example. 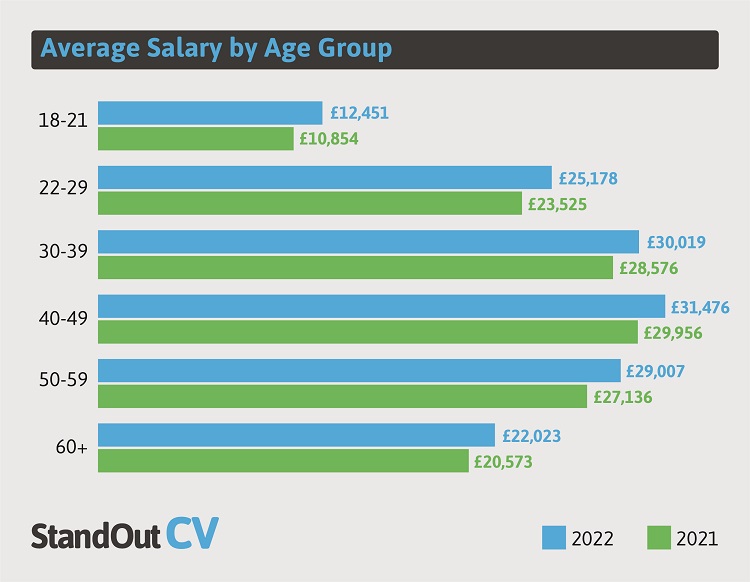 In comparison, those aged under 21 and in full-time work earn over £19,000 less than that of 40-49-year-olds. Year-on-year we can see that all age groups have seen an increased average salary, with those in their 50s seeing the highest increase (£1,871).

Age and the gender pay gap in the UK

Across all the age groups, male workers make more than their female counterparts, with the highest percentage difference found in the 60+ bracket, where men earn 68.86% more than women.

The smallest gender pay gap is among those in the graduate age group (22-29), where male employees have an average salary 16.55% higher than females. In 2021, this same age group saw just a 6.93% gender pay gap.

You can see a full analysis of the average graduate salary in the UK in our complete report.

The full breakdown of age groups and gender pay gap in the UK can be seen in the table below.

Data was sourced and analysed from the latest Annual Survey of Hours and Earnings (ASHE) report by the Office for National Statistics (ONS). Where duplicates or similar descriptions were used for roles, the highest value was retained and used in the analysis. Job titles were amended by our analysts when reviewing the ONS data to ensure clarity and consistency across our data.