The most in-depth analysis on internships in the U.S.

Internships in America aren’t tracked and measured as extensively as employment is, which can make it difficult to find the most relevant internship facts and figures.

We’ve analyzed the latest reports, studies, and research papers from the last few years on internships in the U.S. and compiled all of the most important information on one page.

This page contains all the latest stats on unpaid internships, average salaries, how they affect employment, demographic information, industry statistics, and much more.

Find all the information you will ever need on internships in the U.S. here.

What is an internship?

An internship is a structured program of work experience offered by a business for a fixed period of time. Internships give people, usually students or college graduates, the opportunity to gain experience and skills in a particular industry in which they hope to work. Internships can be offered both with and without pay.

While paid and unpaid are two categories of internships available, they may also be categorized as international or remote, based on what they offer interns. The following is typically how internships are defined and categorized:

How many people do an internship in the U.S?

The latest research reveals that around 21.5% of college students take an internship. Historic studies have put this percentage as high as 60%, however, newer studies do not mirror such high estimates, and actively challenge their accuracy. [1]

Taking this 21.5% figure, that would mean just over 4.17 million students take an internship in the U.S. each year, based on the National Center for Education Statistics student numbers for 2022. [2]

There are an unknown number of adults not in education who undertake an internship too, however, they would account for a much smaller percentage compared to college students. These are often referred to as ‘returnships’ where someone is returning to work having taken a break or made a career change. Research shows that 80% of those who take part in a returnship gain full-time employment. [3]

Internships taken in America over time

By applying the 21.5% figure to the number of student enrollments each year since 2012, we were able to calculate the approximate number of internships completed by students in America each year. 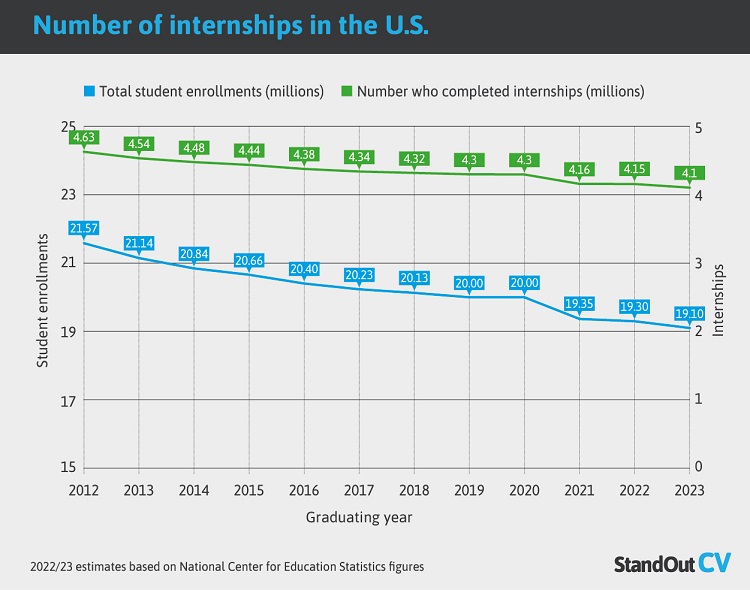 See the table below for the full breakdown of this data:

What is the average length of an internship?

The average length of an internship in the U.S. is 18.3 weeks. [1] With an average workday being 8.1 hours, [4] that would also mean the average internship takes around 1,038 hours to complete.

Some can be shorter or much longer, and many students take part in internships over college summer break which can typically last for around three to four months, depending on the school.

How many students do multiple internships?

Research papers have found that almost a third (31%) of students who undertake internships, do more than one. Women were far more likely (75%) to take multiple internships than men (25%).[5]

Using 2022 student data forecasts, this would mean around 1,286,500 interns in the U.S. would take part in more than one internship over the course of their studies.

Some businesses will pay their interns, this varies in each state and across industries. Below we’ve broken down further studies about paid internship salaries and which companies offer the most money to their interns.

It’s more common for people to work as an intern for less than a year, therefore, they are unlikely to receive the former salary in full.

According to the Bureau for Labor Statistics, the average salary for all workers in the U.S. is $58,260 per year or $28.01 per hour. [8] This means that interns get paid 40.9% less on average per hour than a typical worker.

Intern base salaries by job

This was followed by accounting at $22.93 per hour. In the analysis, those interning in human resources (HR) had the lowest mean pay.

Companies with the highest-paying internships

Large tech and finance companies offer the best pay for their internships. Roblox, the online gaming platform, comes out on top at a median monthly pay of $9,667, followed by Uber and Capital One with $8,333 apiece.

Other high-paying employers for interns include Salesforce, Deutsche Bank, and eBay. The tech industry makes up 17 of the top 25 paying companies for interns in the U.S.

See the table below for the full list of the top 25 highest-paying employers for interns.

There are some cities in the U.S. where you’ll find higher-paying intern positions than others. Chicago offers the highest average hourly wage at $17.74, followed by Los Angeles at $17.26, and Boston at $17.14. 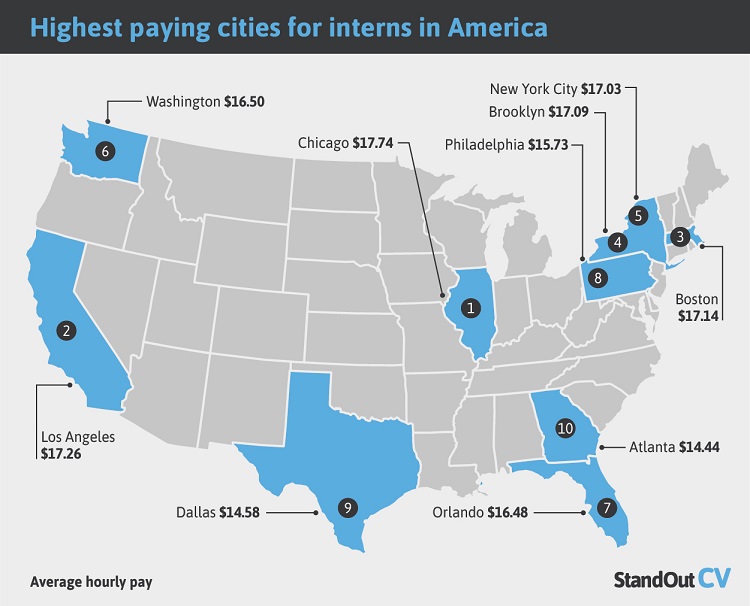 Our own research also analyzed separate Indeed jobs board data to see how many internships were on offer each month when compared to a city’s population to reflect how tough the competition may be to get that first step in a career.

Our study found that Jersey City, New Jersey has the most internships on offer, with the lowest average of one internship available each month for every 94 citizens. Laredo, Texas had the highest competition, with 21,346 residents living in the city per one internship advertised, followed by Fresno, California which had 11,112 residents for every internship.

The best ten cities for monthly internship availability in the U.S. can be seen in the following table:

Studies show that a paid internship is 32% more likely to lead to a full-time job offer than an unpaid one. So while unpaid internships are still worth someone’s time if they need to gain experience in a certain sector, they will have lower chances of being offered a full-time job compared to if they completed a paid one. [11]

This also will be partly due to unpaid internships taking advantage of some job hunters by promising a job at the end of the experience and then not hiring the individual.

Many companies offer unpaid internships highlighting that they are offering the benefit of giving students experience in a real working environment.

What percentage of internships are unpaid?

The latest data shows that 40% of internships in the U.S. are unpaid. [7] When comparing this with student demographics, and the estimated number of internships per year, we calculated that there will be an estimated 1.64 to 1.66 million unpaid interns in America in 2023.

*Predictions based on forecasted data of student enrollment from November 2022.

The data shows without a doubt that interns are mostly students, which already creates a mental image of what an intern in America looks like. While that’s a good starting point, the studies allow us to get a deeper look at what the average intern in America is.

The average intern in America is aged 17 years old. Studies show a large variety in the percentage of students who engage in internships, however, most agree that seniors are typically the largest, or the second largest, group to undertake internships. One study puts this figure as high as 50% of seniors having taken part in an internship of some kind.[13]

There is however no legal age limit to being an intern in the U.S. A lot of people work as interns during the summer while studying at college or before attending college, but some people may do an internship later in life if they’re considering a career change and need to gain some experience.

Some studies highlight that the average age of interns may be around 46, which may be taking into account career switchers later in life, however, there will be far more students as interns than career switchers.

The majority of student interns in the U.S. are white, with white people making up 67.15% of students who take part in internships. This is followed by Asians and Asian Americans at 14.18%, and Hispanic, Latinx or Chicano/a people at 7.05%. 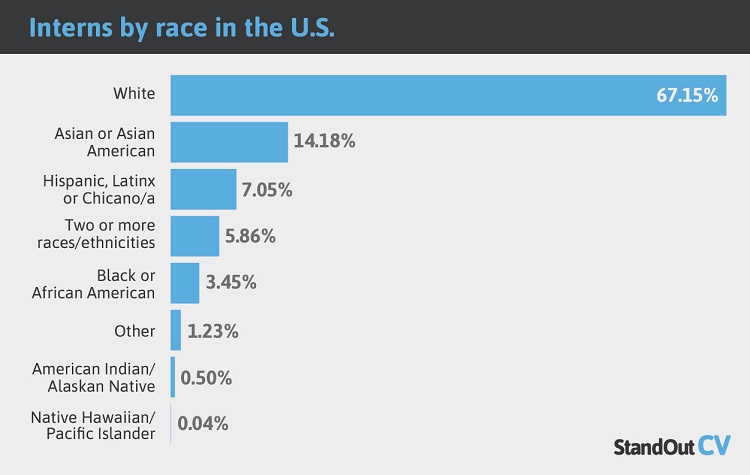 Statistics show that completing an internship makes you 85% more likely to secure a full-time job once you graduate.

The average conversion rate for interns was 66.4% in 2021, meaning just over two-thirds moved into a full-time position after completing their internship, this was just over a 20% increase from 2020 when the conversion rate was 55.5%.

Since 2016, internship conversion rates have stayed fairly consistent, only dropping slightly in 2018 to 45.6%. 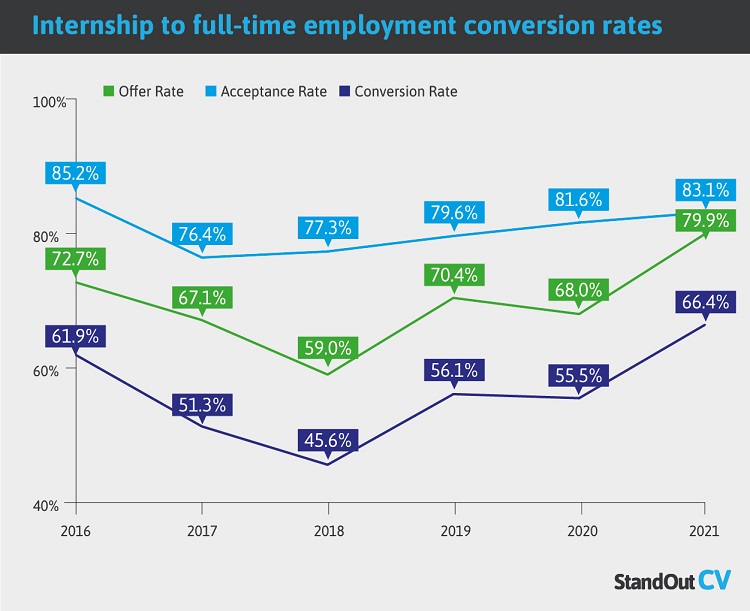 How do internships impact starting salary?

Research shows that those who complete a paid internship will earn around $15,000 more in their median starting salary than those who did not do an internship. 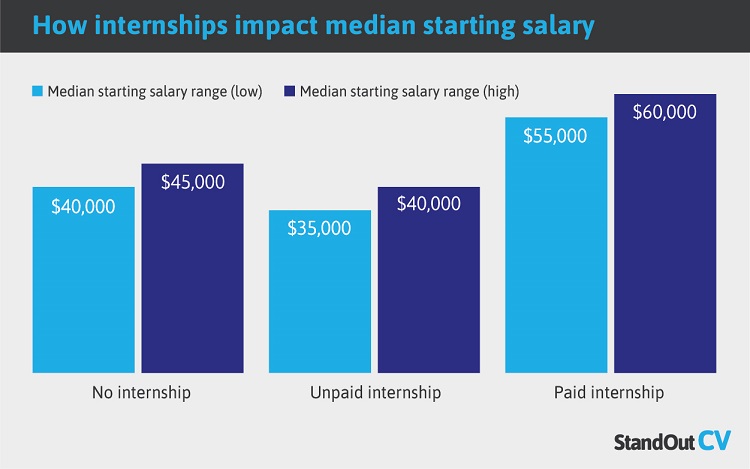 There are plenty of industries in the U.S. that offer internships to students and graduates in order to develop skills and get a taste of a real working environment.

Less popular industries but still making the list are education, government, and pharma or biotech (all 1% each).

Qualifications employers look for in an intern

The qualifications needed to be an intern will depend on the company you’re applying to and the type of job you want to do. If you’re applying as a student intern, most of these requirements will relate to your education rather than your work experience.

Below are the most common education requirements included in intern job openings over the last three years. Topping the list is a Bachelor’s degree with 39% of companies including this in their requirements when hiring for internships. This was followed by high school diplomas or GED at 34% and Associate’s degrees at 13%. 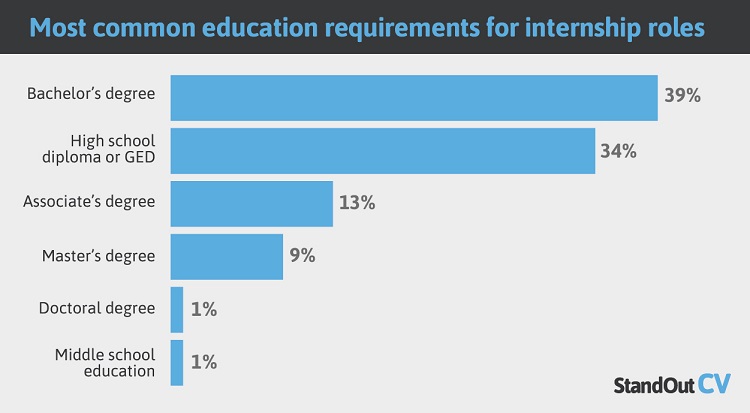 Having certain skills on your resume can make you more likely to be accepted into an internship program. Some of the popular skills that employers look for when hiring interns include:

[12] National Association of Colleges and Employers, ‘WOMEN ARE UNDERREPRESENTED AMONG PAID INTERNS’ (https://www.naceweb.org/diversity-equity-and-inclusion/trends-and-predictions/women-are-underrepresented-among-paid-interns/)