Employee theft in the UK

Who steals the most from their employers?

Employee theft in the UK could be something as small as taking small items of stationery, or it could range to stealing huge sums of money, or even walking out of the office with a range of high-end computers and tech.

Ultimately, no one should be stealing from their employers, but as one YouGov poll shows, at least 38% of British employees are happy to admit they have at some point done so.

We wanted to find out how widespread this issue is, how the pandemic has affected this pastime, and where in the UK harbours the most dishonest employees. We sent out 45 Freedom of Information (FOI) requests to UK police forces to request data on how many crimes they have recorded where someone was caught stealing from their employer in the last few years. Here’s what we found.

What is employee theft?

The UK Government discusses theft by an employee as a crime that is undertaken by one employee or a group of employees, where the property or asset being stolen is owned by the employer. They give two examples:

Looking into this further, one HR company states the definition of employee theft can involve any of the following:

It’s a broad crime, but ultimately, if an employee takes something from the business or employer without permission, it’s likely going to be considered theft by an employee. Let’s look at the worst regions in the UK for employee theft.

Map of employee theft in the UK 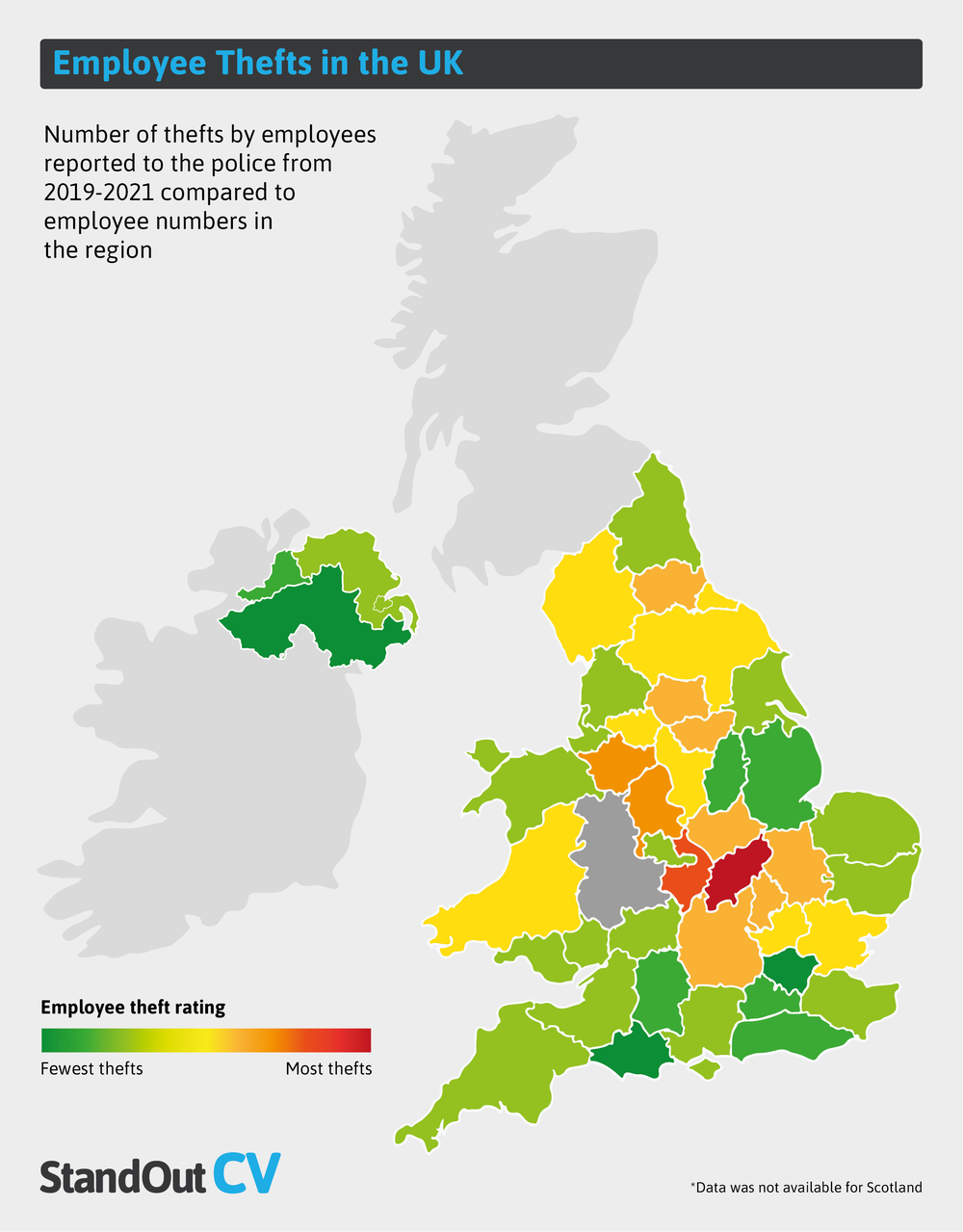 Data note: Scotland was not included in this analysis as the Scottish Police Force does not collect specific data on thefts by employees. They were contacted but could not provide information. West Mercia opted not to send data within 3 months of the FOI request. The map reflects police force boundaries, not geographical county lines.

Overall, employee theft has decreased 35% from 2019 – 2020 with the pandemic and working from home undoubtedly having an impact on this. Comparing nine months of 2021 to 2020, we can see that there has been a further 37% decrease in the number of employee thefts around the country.

In terms of the outright total number of crimes, Greater London is the worst region for employee thefts in the UK with 2,795 recorded by the Metropolitan police since 2019. It’s important to note however, this is with an estimated 5.3 million employees in 2020, over 3.6 million more than the next highest region, Greater Manchester.

When you look at the data proportionally against the number of employed adults in the region, the data paints a different picture with Northamptonshire on top.

The worst regions in the UK for employee theft

Regions in the UK with the lowest proportion of employee thefts

The following are the five regions in England, Wales, and Northern Ireland with the lowest proportion of employee thefts compared to the number of employed adults in the region:

We also spoke to the British Transport Police about this crime, and they had a number of reports of people stealing from employers on the rail network in England, Scotland, and Wales. In 2019, they reported 65 thefts by employees, with 32 in 2020, and 13 in 2021 (up to 1st October).

This crime could be employees who were caught in the act on the train, directly stealing from train operators, or it could be employers stealing assets using their laptops while on the move. The data does not specify these specific details, but comparisons show that in 2019, more people were caught stealing from their employer on the rail network (65) than in Belfast (42), or the City of London (25).

Caught stealing from work – what will happen?

We spoke to Jayne Harrison, Head of Employment Law at Richard Nelson LLP who discussed how employee theft may typically be dealt with, and what the consequences could be:

“An employer is not obliged to give a reference to an employee but if they do so it must be an accurate and true reference. Therefore, an employer, if they do provide a reference, would want to give details about the reason for dismissal and any employee trying to find new employment may find that their prospective employer is made aware of the reasons why they were dismissed. As such, it may be more difficult for an employee to find new work if they have been dismissed for gross misconduct, although not impossible, as employers tend to view gross misconduct more seriously than other reasons for dismissal.”

A total of 45 Freedom of Information requests were made in October 2021 to all police forces in England, Wales, Scotland, and Northern Ireland. The FOI request asked for the number of ‘Theft By An Employee’ offenses (Home Office Code 41) recorded by each police force for the years 2019, 2020, and 2021. The data for 2021 crimes collects information up until 1st October 2021 due to the date of the FOI request and should be considered accordingly.

Scotland did not supply the data as they do not record statistics for ‘Theft by an employee’, instead, they label such crimes as ‘thefts’ alongside other crimes, therefore it was not possible to retrieve such data. As of January 10th, West Mercia had opted not to send data to us, almost 3 months after the initial request was filed, therefore could not be included.

Northern Ireland policing regions are comprised of the following:

We compared the number of crimes per region with the estimated working population of the area. We estimated employment figures by taking 79% (England and Wales’ working-age population proportion) of the police force area population, against the region’s employment percentage to estimate how many people could be reasonably classed as employees in the region.

To get the overall ranking of regions we analysed the total thefts from 2019-2021 against the number of employees in the region.